North West Air Ambulance Charity (NWAA) were the Club’s official designated charity partner throughout 2020, with the striking yellow alternative shirt being based around the charity’s iconic image and £5 from each jersey sold being donated to the crucial emergency service.

Those proceeds, coupled with some phenomenal bids from supporters who won the first team squad’s match issue versions of the same jerseys and individual donations in aid of the cause, have ensured that the year-long appeal managed to exceed the initial fundraising expectations in spite of the Covid-19 pandemic preventing a number of planned activities from taking place throughout the year.

The North West Air Ambulance Charity’s helicopters and rapid response vehicles operate 365 days a year, with highly skilled specialist doctors and HEMS (Helicopter Emergency Medical Service) paramedics on board providing pre-hospital care and hospital transfers to patients across the entire North West region each year. With Rugby League injuries among the incidents they attend, in their distinctive yellow and blue helicopters, the Club was keen to give something back through the charitable partnership.

Geoff Warburton, sales director at Wigan Warriors, has expressed his delight at the final total, explaining: “In spite of a hugely challenging year for charities in general, our supporters and the Rugby League public have really done this appeal proud with the amount that they have come together to raise. We extend our sincerest thanks to every single person who has supported this appeal through every individual contribution.

“We have the utmost admiration for what the North West Air Ambulance Charity achieves on a daily basis and the immense challenges that they overcome in order to save the lives of people within our region, so it has been our pleasure to make this year-long fundraiser happen and find ways of generating new income streams when our initial plans were affected by the pandemic.

“To raise £14,300 for such a deserving cause is a real privilege and we hope that we can make our overall total even higher as the summer progresses, as we hope to welcome NWAA’s fundraising team to a Betfred Super League game for a bucket collection once crowd levels are back up to around normal levels.”

Adding their weight to the collective vote of thanks, NWAA’s corporate partnership officer, Chris Andrews, added: “We are incredibly grateful to all the fans, players, and staff of Wigan Warriors for their tremendous support throughout 2020.

“North West Air Ambulance Charity is funded entirely by charitable donations, so without supporters like Wigan Warriors, we wouldn’t be able to continue making a lifesaving difference to patients across the region.

“The passion and dedication of the club and fans has never wavered during the entire partnership and we are hugely pleased with the amount raised for the charity.”

If you’d like to support NWAA with a donation, you can do here. 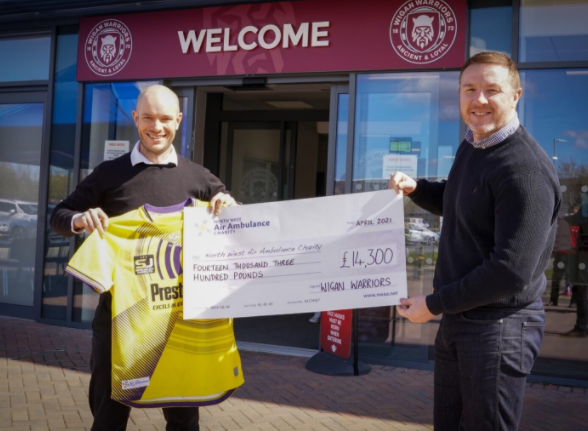