The North West Air Ambulance Charity (NWAA) has reached a significant milestone in its ‘Blood on Board’ project, bringing blood transfusion to critically ill and injured patients across the region. The service administered blood products to its 100th pre-hospital patient in March 2021, after introducing the capability to perform pre-hospital blood transfusions by the road and in the field in January 2019.

NWAA attends over 2,000 missions each year. Many are major trauma incidents, the likes of which require advanced care at scene to improve patient outcomes prior to hospital admission. This includes roadside blood transfusions which increase oxygen delivery and clot production, both crucial when a patient is suffering from massive bleeding.

Blood on Board is a collaboration between the charity, Blood Bikes Manchester, the North West Ambulance Service (NWAS) and Salford Royal NHS Foundation Trust Transfusion Service (SRFT). It was initially funded by the Henry Surtees Foundation, a charitable organisation supporting those with physical injuries caused by accidents.

Each day, Blood Bikes Manchester transport packed red blood cells and pre-thawed plasma from Salford Royal to NWAA’s Barton base. Blood products that are not used that day by the air ambulance team are safely returned to Salford Royal for use in the hospital, to ensure precious blood donations do not go to waste.

Clint Jones, Consultant Anaesthetist at the North West Air Ambulance Charity, commented: “Since we introduced this capability with our partners, we’ve been closely monitoring and evaluating the impact it has had on patients. A significant number of patients who sustain traumatic injuries that cause massive blood loss, sadly pass away before reaching hospital. By transfusing blood and plasma as early as possible, we are drastically improving the chances of survival for the most seriously ill and injured patients we treat.

“The charity is so proud to have reached this milestone. I would like to say a huge thank you to all of our partners who continue to make this possible and continue to support and champion our charity, including Blood Bikes and our colleagues in the NHS. The North West Air Ambulance Charity relies solely on donations to remain operational, and without the generosity of our sponsors and supporters, it would not be possible to deliver this lifesaving service.”

Since starting the “Blood on Board” project, the charity has recorded the following:

Steve Deakin, Blood Bikes Manchester, said: “We are so proud to continue to work side-by-side the North West Air Ambulance Charity and Salford Royal to deliver this service for people across the region. Transfusions in the field can make a considerable difference to patients’ lives and it’s an honour, as an entirely volunteer-run operation, to be playing a role in this.”

Deborah Seddon, Haematology and Blood Transfusion Service Manager at Salford Royal NHS Foundation Trust, commented: “When the project was first proposed we were keen to be involved in any way we could, as our team understands the dramatic role blood loss plays in the survival of traumatic injuries and the difference that could be made if patients were able to access transfusions as early as possible. The Salford Royal Transfusion Service is committed to delivering safe, effective treatment, so we are incredibly proud to support the charity in this manner for the benefit of people all across the North West.” 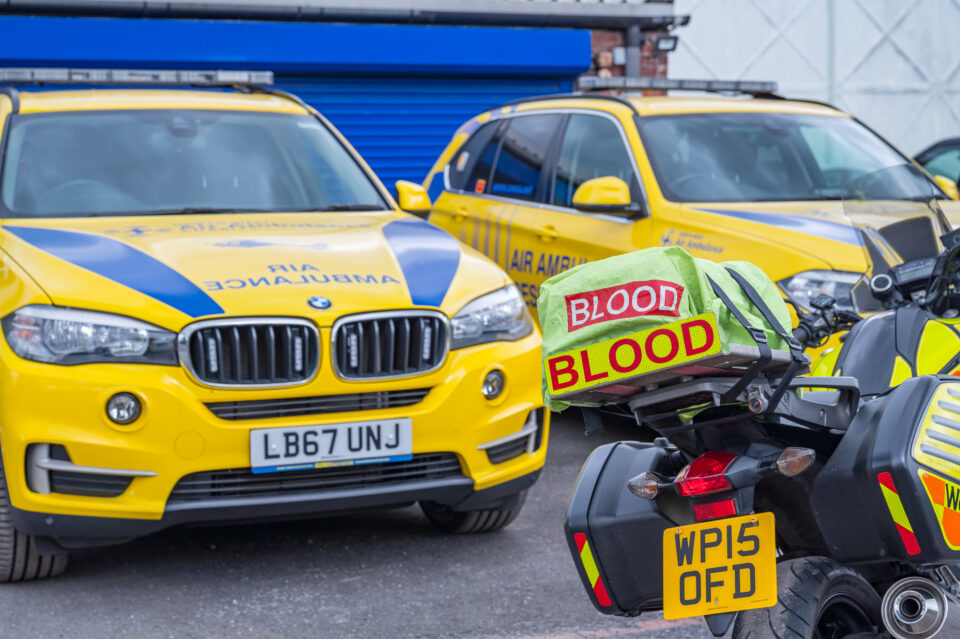