The new, lifesaving helipad at Manchester University NHS Foundation Trust (MFT) – the first elevated helipad of its kind in the North West – has opened to patients today (Monday 10th May, 2021).

The state-of-the-art helicopter landing pad, which is situated on the roof of Grafton Street car park on Oxford Road Campus (ORC), will enable critically ill or injured babies, children and adults to be airlifted straight to MFT hospitals in Manchester city centre.

The helipad will bring adults and children with life threatening injuries to the Major Trauma Centres at Manchester Royal Infirmary (MRI) and Royal Manchester Children’s Hospital (RMCH), both co-located on the Oxford Road Campus of Manchester University NHS Foundation Trust site in the centre of Manchester.

The new helicopter landing site on Oxford Road could allow as many as 300 patients to be airlifted to ORC hospitals each year and is expected to save lives locally and regionally, increasing the chances of an improved level of recovery for many seriously ill or injured patients.

To mark the opening of the helipad at the Oxford Road Campus, a dedicated film has been produced to provide a further insight into the difference the Helipad will make to patients in the North West region and beyond. You can watch this here.

Alistair Rennie, Consultant in Emergency Medicine and Major Trauma at the MRI and RMCH and Group Clinical Lead for Emergency Planning said; “The helipad will benefit major trauma patients across Greater Manchester and beyond, including people who have suffered serious injuries in road traffic accidents, assaults, sudden illnesses or falls in areas difficult to reach by road ambulances.

“As a consultant in Emergency Medicine, we know the quality and speed of specialist medical care following a major trauma injury is vital to ensuring patients have the best chance of a full recovery. In these situations, patients need to be transferred to a Major Trauma Centre, which we have on site here at the MRI (Adults) and RMCH (Children’s).

“I am delighted that this development is now a reality at MFT’s Oxford Road Campus, as for many patients our helipad could represent the difference between life and death.”

A phenomenal £3.9million towards the helipad was raised in just 12 months by Manchester Foundation Trust Charity’s Time Saves Lives Appeal.

This included £1.1million from the government’s LIBOR fines funds in the Chancellor’s Budget and a generous donation of £1.36million from the County Air Ambulance Trust’s HELP (Helicopter Emergency Landing Pads) Appeal. The HELP Appeal is dedicated to funding hospital and air ambulance helipads across the country. The Charity was also grateful to receive a significant donation from The Stoller Charitable Trust.

Andy Curran, Medical Director, North West Air Ambulance Charity said: “When it comes to major trauma incidents, it’s absolutely vital that our crew are able to reach, treat and transport patients to the most appropriate specialist centre as soon as possible to improve chances of survival. On-site helipads ensure patients can reach these centres incredibly quickly, and the MFT site helipad allows access to both adult and children’s Major Trauma Centres.

“It’s a significant step forward for the provision of enhanced pre-hospital care within Greater Manchester and the wider North West, and countless patients will benefit from this helipad in the years to come. A huge thank you to every single person that donated to and supported the new site. This will make a lifesaving difference to so many people.”

Once a helicopter has landed, patients will be safely off-loaded from the air ambulance by the team at the North West Air Ambulance Charity and then transported via the high-level patient transfer corridor by specialist dedicated helipad transfer teams.

Kathy Cowell, MFT Chairman said; “There are a number of big organisations who made this possible with their significant donations, but it is also important to acknowledge our families, local businesses and fundraising events which also made generous contributions too.

“I’d like to extend a big ‘thank you’ to all those people who ran a marathon, held a bake sale or took part in one of our Charity events. Every single person who made a donation is now helping save a life.”

In addition to the services available at MRI and RMCH, Saint Mary’s Hospital (SMH) provides specialist and emergency care for women and babies with a 24-hour High Dependency Obstetrics Unit. It also has one of the largest neonatal intensive care units offering surgical and medical care for newborn babies, co-located with RMCH.

Lorcan Duane, Paediatric Emergency Department Lead for Major Trauma at Royal Manchester Children’s Hospital said; “The new helipad at MFT will have a tremendous impact on children and young people across Greater Manchester and beyond who need access to the specialist services we provide at RMCH.

“The helipad will not only benefit children with major trauma injuries, but also children who need time critical transfers from other hospitals for specialist care and treatment at either RMCH or SMH. The speed with which a helicopter can transfer these types of patients is crucial and our new helipad will give air ambulance patients the safest and quickest place to land, directly at MFT.”

The helipad has been commissioned by the Air Ambulance Operators and inspected by the Civil Aviation Authority international (CAAi) to ensure it complies with the regulatory standards for helipads at hospital sites.

Tony Eggar, Senior Helipad Officer at MFT said; “All flights to and from the helipad will be overseen by the Helipad Response team on ORC who will manage the safe landing and departure of the aircraft. Last month, we ran refresher training days for all staff working on the helipad and going forward, my role will be to ensure the highest standards are met and that the roof-top MFT helipad remains safe for all our patient transfers in the future.”

Previously air ambulances carrying critically ill or injured patients to hospitals on Oxford Road had to use a secondary landing site in parkland a mile away. Patients were then transferred by road ambulance.

Robert Bertram, Chief Executive of the HELP Appeal said; “The HELP Appeal is proud to have donated £1.36 million to this state-of-the-art Major Trauma Centre helipad – our 36th in the country to open.  Not only will the transfer of an air ambulance patient to the Emergency Departments, be much smoother and faster, greatly improving their chances of survival and recovery – but it will also eliminate the need for a secondary transfer by road ambulance, freeing up North West Ambulance crew to help other patients in need across the region. Thank you to everyone that has supported our lifesaving mission.” 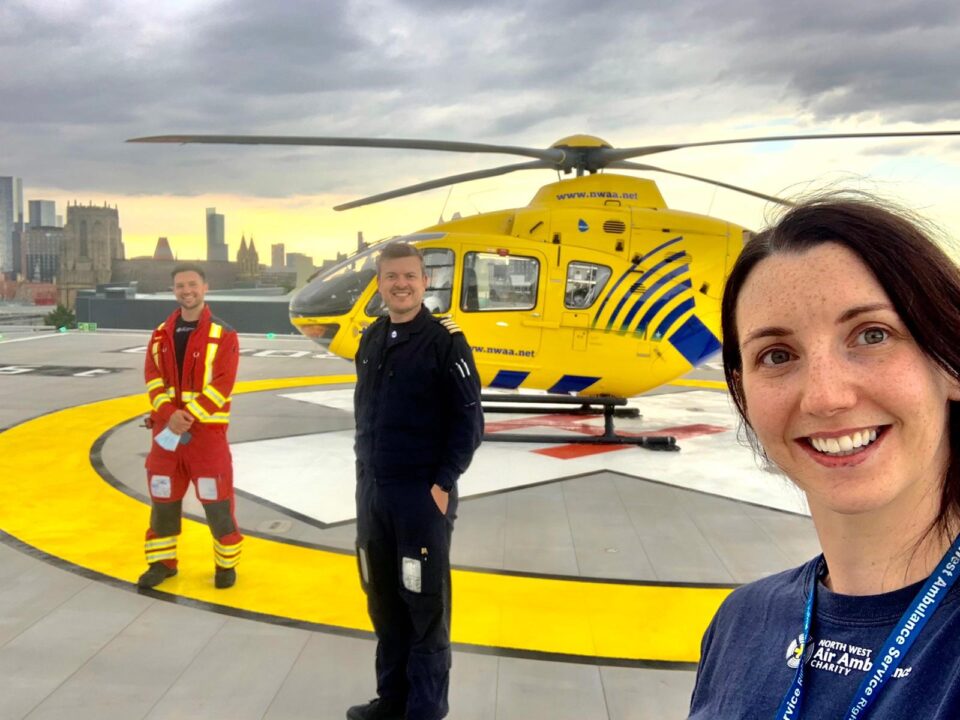