Nearly four years after a traumatic car accident in Crewe, a family are giving back to the charity that saved their lives.

In July 2017, while on a day trip to a farm in Crewe 35-year-old Emma Mountford and her 3-year-old daughter Lily were enjoying a picnic when they were caught in a serious accident as an elderly driver lost control of his car and drove on top of Emma.

The car struck Lily in the face and came to a stop on Emma’s chest. Emergency services were called and the North West Air Ambulance Charity (NWAA) raced to the scene.

With two patients requiring different medical attention, two of NWAA’s helicopters arrived to take Emma to Aintree University Hospital and Lily to Alder Hey Children’s Hospital for urgent care. Emma suffered a complex fractured pelvis, a broken hip, broken ribs, a blood clot on her lung and a haemothorax, where blood collects between the chest wall and lung. She remained in surgery for ten hours at Aintree and stayed in hospital for six months.

When the accident happened, Steve Mountford, Emma’s husband and Lily’s dad, was on a walking trip to Snowdon, and their son Josh was on a camping weekend with Cubs. With Emma and Lily in separate hospitals, Steve needed to make the difficult decision on who to visit first. Lily, now 7, spent a night in Alder Hey before being discharged. The incident affected her considerably, with Lily later undergoing counselling to process the distressing day.

Despite suffering severe nerve damage to her left leg, which no longer has any feeling from the waist down, Emma has returned to her role as a dental nurse with the NHS. Both Emma and Steve are key workers, and have juggled working with home schooling throughout the pandemic.

Emma said: “The crews who came to us were fantastic. On such a distressing day, they helped to calm us and got us the support and care we needed. I remember joking with them about my fear of flying and how it was worse than the car that just ran into us!

“Even though it was awful being separated from Lily, the fact that they were able to get us both to specialist care centres to receive the right treatment quickly was incredible, and I’m so grateful that the crew were there for us that day. Since the accident, their support hasn’t ended, with the charity supporting Lily’s therapy after the accident. The bravery certificates and knitted gifts have helped her so much, rebuilding her confidence after such a traumatic accident.”

Andy Duncan, Lead HEMS Paramedic at the North West Air Ambulance Charity, said: “When multiple people are involved in a serious accident, it’s really important that each patient gets to the most appropriate specialist hospital that will provide them with the best care. That we were able to get two helicopters to the scene, and treat and transport both patients as they travelled to opposite sides of Liverpool, is testament to the value of the air ambulance, and our collaboration with other services in the region.

“It’s great to hear that Emma and Lily are both recovering, and that the family is involved in fundraising and supporting our work all these years later. It wouldn’t be possible to carry out missions such as these without the support of people like Emma, Steve and Lily.”

NWAA is a charity and receives no government or NHS funding, relying solely on the generous support of the people of the North West, and corporate donors. It takes over £9.5 million a year to fund the lifesaving work of its highly skilled Helicopter Emergency Medical Service (HEMS) paramedics, doctors and pilots, who bring the hospital to the patent 365 days a year. In 2020 alone, the charity attended 2,570 missions across the North West. 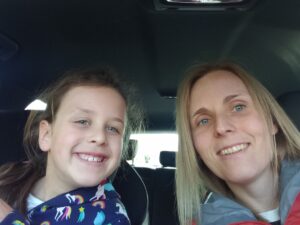