Kai Clayton, now four, was left fighting for his life after the horror crash on July 13th last year, just months before he was due to start his reception class at St Kentigern’s R.C. Primary School, Fallowfield.

A speeding truck struck little Kai and left him with a fractured skull, multiple bleeds on the brain, a broken pelvis, broken femur, five broken ribs, a lacerated liver, and trauma to his lung. A land ambulance was alerted, with NWAA flying to the scene shortly after given the severity of his injuries.

The charity’s advanced Helicopter Emergency Medical Service (HEMS) crews placed Kai in an induced coma at the side of the road, performing a rapid sequence induction (RSI), a procedure to manage his breathing whilst under anaesthetic. Kai’s mum Sarah believes that without this quick intervention, the extent of Kai’s injuries could have been so much worse.

Kai’s mum, Sarah Clayton, 42, recalled the traumatic day: “It was such a normal day, to begin with. We were on the way to pick up a new TV, which Kai was excited about, and leaving the shop he was waiting patiently to cross the road. In seconds, everything changed. The truck threw him really far down the road, so at first, I couldn’t see him, just smoke billowing and people running everywhere. Someone had moved him to the pavement, where his sister was attempting CPR. She had to stop because she was so upset, and two passers-by stepped in to help. It felt like forever before someone shouted, ‘He’s breathing!’

“Once the police told me the air ambulance had arrived, I realised how serious the situation was. You start preparing yourself for the worst, wondering if Kai and our family would ever be the same again. The air ambulance crew were brilliant though. The doctor and paramedics reassured us, talking us through exactly what was happening and the procedures they were doing. I genuinely believe that without their care at the roadside, Kai wouldn’t have made the incredible recovery he has today. Without that treatment, the damage could have been so much worse – physically and emotionally.”

Travelling with the NWAA crew by land ambulance to Royal Manchester Children’s Hospital (RMCH), Kai underwent emergency surgery and spent two weeks in intensive care, before being transferred to another ward for further treatment.

Eventually discharged three months later in October, he has undergone intense physiotherapy ever since, relearning to walk, talk, breathe independently, eat and swallow. The determined youngster hasn’t let this slow his recovery and is already back to walking (with some wheelchair assistance) and enjoying school with his friends.

Dr Scott Beattie, HEMS Doctor at NWAA, was the doctor on scene with Kai: “With traumatic brain injuries like Kai’s, time truly is of the essence. The faster you are able to treat the patient, by alleviating the pressure on the brain, stabilising their condition, and moving them to specialist centres such as the Royal Manchester Children’s Hospital, the better chance of survival you can give them. Kai’s recovery has been nothing short of miraculous, and to hear he’s made so much progress in under a year is amazing. He’s a really brave young boy, and we wish him and his family all the best.”

The charity has kept in regular contact with the family throughout Kai’s recovery, sending a bravery certificate and a knitted ‘Paramedic Pup’, NWAA’s canine mascot, which is now one of his most treasured toys.

As an entirely charity-funded organisation, NWAA relies on the generosity of the public to raise the £9.5m it needs each year to attend lifesaving missions such as Kai’s. Its highly skilled HEMS paramedics, doctors, and pilots, are able to bring the hospital to the patient, operating 365 days a year. In 2021 so far, the charity has attended 322 missions within Greater Manchester.

Sarah continued: “After the accident I found out the air ambulance was completely charity funded, and I couldn’t believe it. You truly don’t appreciate how important the service is until you need them. Without NWAA and the RMCH team, Kai wouldn’t be where he is today. We’re all so proud of him, he’s done so fabulously with his recovery and shown everyone what a brave, resilient boy he is.” 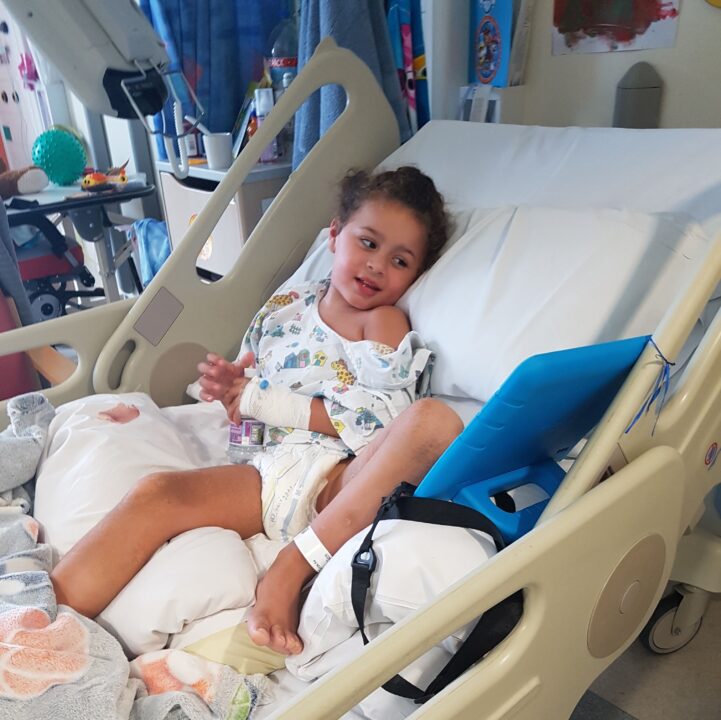