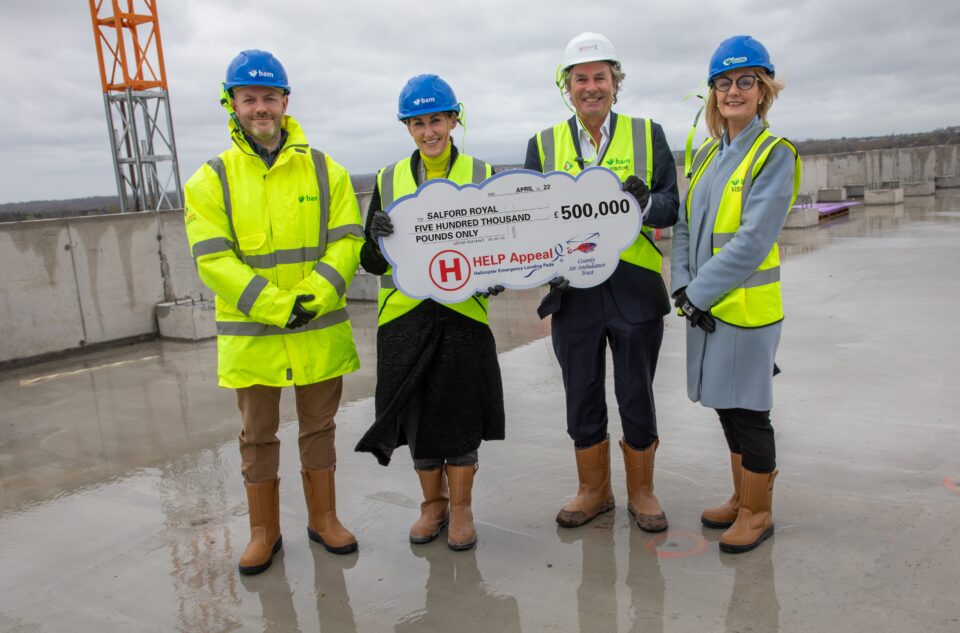 Salford Royal’s new hospital will have a new rooftop helipad that will receive seriously injured or ill patients directly into the hospital by helicopter. This means that up to 20 minutes will be saved in transferring a critically ill patient from an air ambulance to the hospital.

Although Salford Royal has been a Major Trauma Centre for several years, this is the first time the hospital will have a helipad, meaning that severely ill or injured patients will be able to receive their urgent care and treatment even quicker. It is anticipated that approximately seven flights could land at the helipad every week.

“A helipad at Salford Royal is a game-changer” – Heather Arrowsmith, CEO

Heather Arrowsmith was invited to see the new helipad in progress as representatives from the HELP Appeal presented the first of four £500,000 instalments. This will fund the helipad’s entire construction on the rooftop of the new hospital.

Heather Arrowsmith, CEO at North West Air Ambulance Charity, said: “As a charity, our priority is to bring the hospital to the patient. That means providing enhanced pre-hospital care at scene to the most critically ill and injured patients in our region. Once we have stabilised the patient, our focus is on getting them to the most definitive point of care for their onward treatment.

“A helipad at Salford Royal is a game-changer. It means we can take patients, often with multiple serious and complex injuries, directly into the unit to access the treatment they urgently need. This will save time and save lives.”

Dr Scott Beattie, who is and also a consultant in Salford Royal’s Emergency Village, said: “It’s our job to care for the sickest of patients; those patients who have received the most serious type of injuries or experienced a really serious illness. Time is of the essence with these patients Fast access to specialist treatment is vital to give patients the best chance possible of surviving and, if they survive, going on to make the best recovery.

“At the moment, patients that are brought to us by air ambulance, land in a nearby sports field and are then transported to us by road ambulance. Although the sports field is less than half a mile away, this costs precious time. We believe that having an on-site helipad at the forthcoming Greater Manchester Major Trauma Hospital could save 20 vital minutes for a patient.

“As an air ambulance doctor myself, I regularly see the benefits that having an on-site helipad brings and I am therefore really excited that we will receive one as part of our new and improved facilities.” 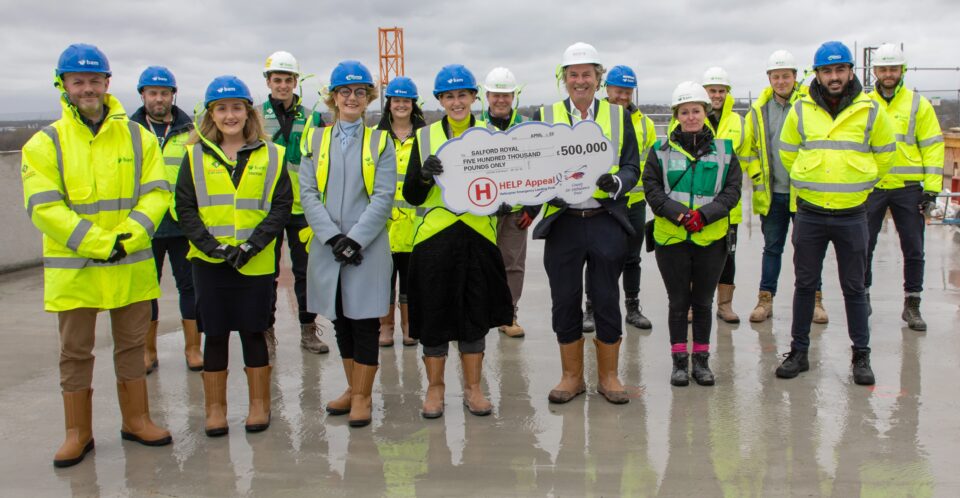 Colleagues celebrate the presentation of the first of four £500,000 instalments by the HELP Appeal to fund a helipad at Salford Royal.