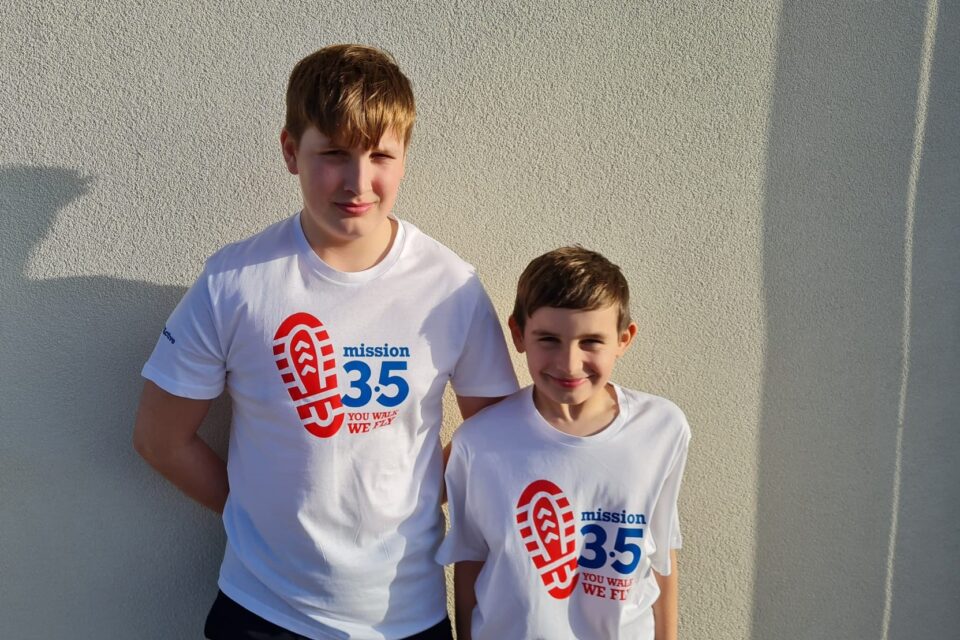 Olly and Seb have signed up to take part in Mission 3.5.

The family of two brothers who received urgent care from North West Air Ambulance Charity are encouraging others to join them in going extra mile, by taking part in Mission 3.5.

13-year-old Olly and nine-year-old Seb Cliffe want people to walk, run, hop, skip or jump 3.5 miles every day for a week from 7-13 March to raise funds for the charity that saved their lives.

Mission 3.5 is an opportunity for family and friends to get together, keep fit, socialise and have fun. All while raising money to provide life-saving emergency care across the North West of England.

Olly Cliffe and Seb Cliffe from Crowton, were given life-saving treatment by the charity on a cold day in January 2021. The boys were at their home in Cheshire, which was being constructed at the time, and fell from a height of over 12ft on site.

They were attended to by not one but two North West Air Ambulance Charity helicopters.

Recalling the day of the accident mum Natalie Cliffe, a lecturer at Coleg Cambria in Northop, said: “I came home and a neighbour told me there had been an accident.  I assumed one of the boys had fallen off their bike but I turned the corner and saw both of them lying on the floor.

“My neighbour called 999 and as she was on the phone I said that we’d need two ambulances. A rapid response ambulance was on the scene very quickly, but then I wasn’t expecting two air ambulances to arrive. I cannot tell you the relief I felt.”

Treated at the scene by one of North West Air Ambulance Charity’s doctors and critical care paramedics, the brothers were then transferred to Alder Hey Children’s Hospital. they were transported in separate land ambulances, Seb accompanied by the NWAA doctor.

Natalie said: “It was a traumatic experience. I don’t remember much, but the doctor on board the air ambulance came and told us exactly what was happening. The whole team were fab.

Since the accident the Cliffe family have raised £2,500 for the North West Air Ambulance Charity through bike rides, sponsored runs and hikes. Now they are calling on others to go the extra mile by taking part in Mission 3.5. Every journey by the North West Air Ambulance Charity costs on average £3,500. By walking 3.5 miles each day you can help keep the air ambulance in the sky in our area.

Natalie said: “Olly and Seb knew just how much our treatment must have cost, so we really wanted to fundraise for the charity. Until you actually need them, you don’t know how important they are.”