A long standing North West Air Ambulance Charity volunteer and fundraiser has been recognised for years of dedicated service to the charity.

Freda Whittle was nominated for Blackburn with Darwen Borough Council’s Community Volunteer of the Year by NWAA colleagues.

Staff at the charity wanted to recognise her work and surprised Freda with a bouquet of flowers, and presented her certificate of recognition at the charity’s Barrowford shop where Freda works. 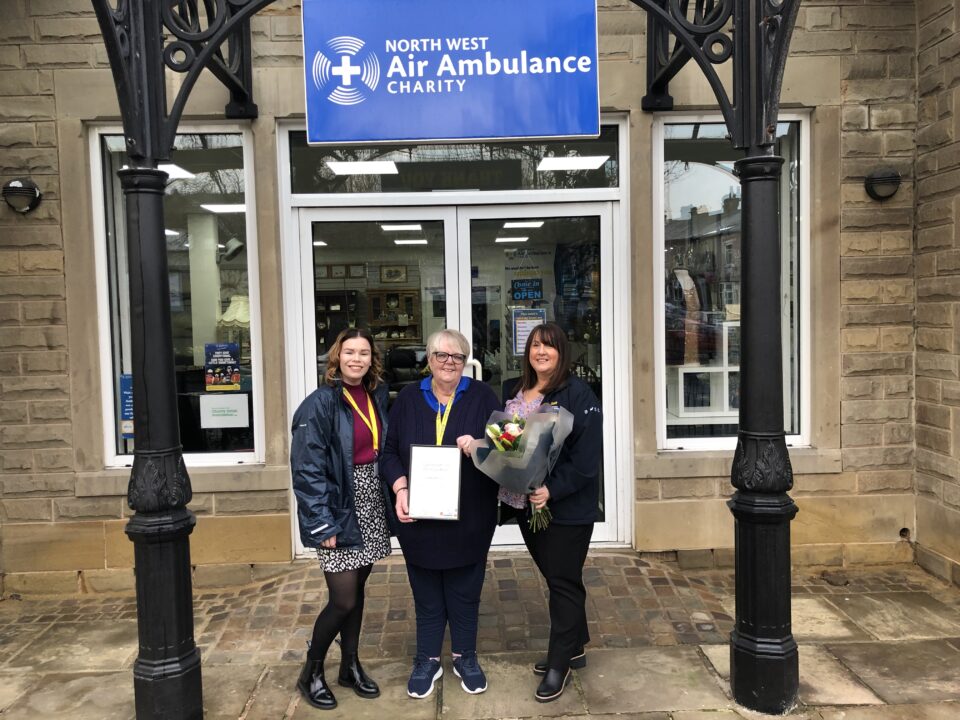 Speaking about her time volunteering for NWAA, Freda said: “North West Air Ambulance Charity is such a worthwhile charity. I have a friend whose daughter wouldn’t be here if it wasn’t for the air ambulance.

“It is a good charity to volunteer for and you can also see where the money goes where it’s supposed to. Because of where I live, the air ambulance goes over where I live a lot and I say ‘that’s one of ours’.

“It’s nice to be nominated, but it is recognition to the charity as well, which I think is more important.”

Lisa Rawcliffe, volunteer co-ordinator who nominated Freda, said: “Wherever Freda is or what she is doing, she is constantly promoting, volunteering and talking about how volunteering benefits her wellbeing. Thanks to Freda many people now know about the charity and the lifesaving work that we do.

“She is an amazing volunteer and is a very valued part of Team NWAA.”

Feeling inspired? Our North West Air Ambulance Charity volunteers are our champions within the community. They spend time actively raising our profile, increasing awareness of our service and help raise vital funds to keep our crew in the skies and on the ground. Explore opportunities in your area.