Working with NWAS, Glossop’s Will Griffin, 29, had seen first-hand the impact of the air ambulance, working alongside them on a number of jobs. Inspired to fundraise, he decided to take on a gruelling 80-mile run across Hadrian’s Wall, completing it in just 18 hours.

Will said: “The pandemic has hit everyone so hard this year, in particular the emergency services. I wanted to use lockdown to do something valuable and signed up to the challenge so I could get training for an important cause. The air ambulance is always at hand to help on some of the most severe jobs I’ve seen in my time. The crew do an incredible job, and when I learned they don’t receive any government support, I wanted to do something to give back. It’s been a lifeline for so many people over the years.”

Beating his target of £1,000, fundraisers such as Will are vital to keeping NWAA in the skies. As the charity is not part of the NHS or a recipient of government funding, it instead relies on generous donations, volunteers, and fundraisers to remain operational. It takes over £9.5 million a year to fund the work of its highly skilled Helicopter Emergency Medical Service (HEMS) paramedics, doctors and pilots, who attend to cases of serious illness and traumatic injury 365 days a year. In the last twelve months, the charity attended 2,640 missions in total, including 937 in Greater Manchester.

Will added: “Not many people realise that the air ambulance is charity-funded, so it’s really important to do what you can to support it. I was proud to be able to do my bit to allow them to continue with their work. I’ve seen first-hand what the crew bring to the scene and the enormous impact they can have on the lives of patients.”

Victoria Jones, NWAA’s regional fundraiser, said: “Our amazing community of supporters and fundraisers like Will are crucial to keeping our service running, and ensuring our brilliant crews can be there for patients in their time of need. They work closely with the emergency services in the region so that together we can get the best possible outcomes for our patients, and the fact that Will, an NWAS EMT himself, chose to support us means so much. On behalf of the whole charity, especially our crew, we want to say thanks to Will for his fantastic efforts, and congratulations on completing such a tough run!” 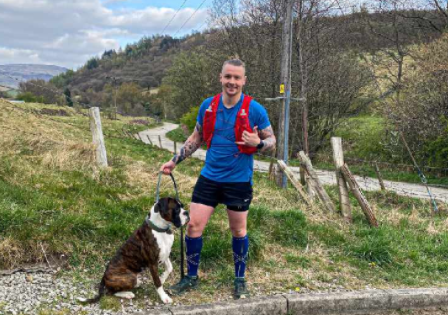