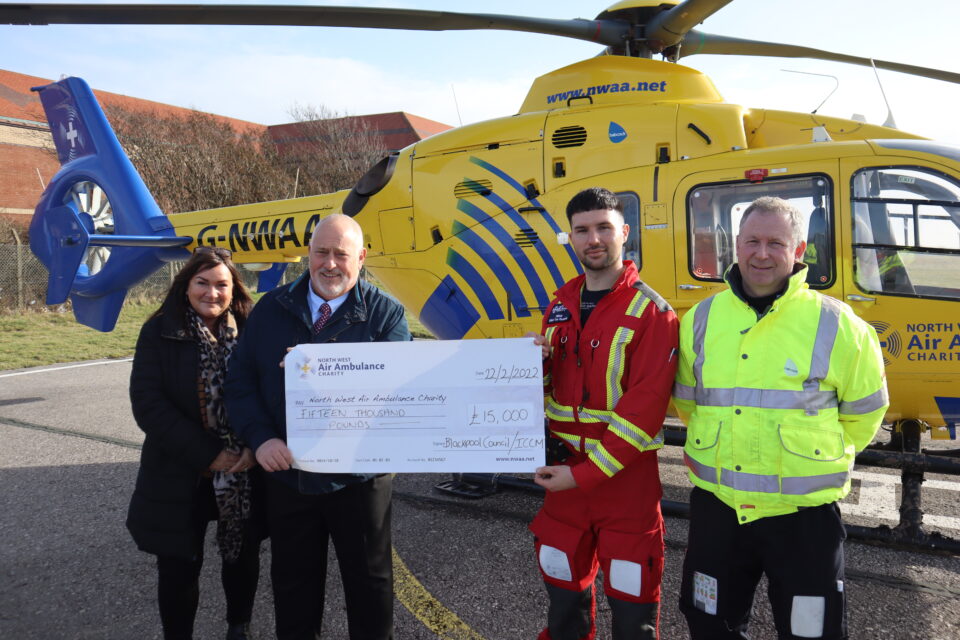 The cheque was presented to the North West Air Ambulance  Charity by Councillor Neal Brookes, Blackpool Council’s Cabinet Member responsible for cemeteries and the crematorium on behalf of the Institute of Cemetery and Crematorium Management (ICCM).

The charitable Metal Recycling Scheme run by the ICCM, involves the sale of recycled metal materials recovered following cremations, such as hip and knee replacements.

In the past, this metal was removed and buried in the grounds of the crematorium but this became less acceptable on environmental grounds.

Families give their permission for the residual metals to be recycled via the nationally recognised scheme.  Proceeds are shared between members such as Blackpool Council to donate to a charity of their choice.

The metals are collected by a specialist company called Orthometals who are responsible for collecting the metals from all the crematoria who are taking part in the scheme.

Kelly Stepaniuk, regional fundraiser for North West Air Ambulance Charity, said:  “We hope that families who have lost loved ones this year can take some comfort in knowing this donation will help save lives across the North West. Thank you to Blackpool Council and to all Blackpool residents for their support.”

Councillor Neal Brookes, Blackpool Council’s Cabinet Member responsible for cemeteries and the crematorium, said: “We are delighted to be able to support the North West Air Ambulance Charity with this donation of £15,000.

“The service which operates 365 days of the year provides vital emergency support to those that are injured and their skilled crews save so many lives.

“It’s so heart-warming to know that this donation can contribute towards such an incredible service that helps others who are in such need of urgent assistance.

“The money is presented to the NWAA with special thanks to the bereaved families who gave their permission for metal to be recycled at the crematorium.”