A seven-year-old girl who collapsed suddenly in her garden has thanked the North West Air Ambulance Charity for helping to save her life, by raising £3,000 with a ‘big chop’ sponsored haircut.

Erin Garstang was playing in the garden with her sisters when she collapsed to the ground and stopped breathing. After receiving CPR from her mum a paramedic arrived at the scene, but it was clear that Erin needed urgent care and the North West Air Ambulance Charity were called. Mark, a HEMS paramedic, provided lifesaving pre-hospital treatment to Erin and rushed her to Blackpool Victoria Hospital, where she was stabilised in an induced coma, before being transferred to Alder Hey Children’s Hospital.

Erin went through months of tests at Alder Hey and was diagnosed with catecholaminergic polymorphic ventricular tachycardia (CPVT) – a genetic condition characterized by an abnormal heart rhythm.

As this had taken place at the height of the pandemic, parents Rob and Clair were unable to join Erin initially on the ward. Erin was also separated from her two sisters for the entirety of her hospital stay.

But ‘super tough’ Erin carried on and four weeks after diagnosis she was fitted with a device similar to a pacemaker to regulate her heartbeat.

It wasn’t long before Erin finished her stay in Alder Hey… and was cartwheeling on the grass outside the hospital! She was also able to join her sisters back in school just a few days after leaving.

To say thank you to NWAA for saving her life, Erin wanted to do something to raise some money for the charity. During treatment, she experienced traumatic hair loss, which temporarily left her with a missing patch of hair on the back of her head.

So to raise funds, Erin took part in a sponsored haircut raising £3,000, with matched funding from her dad’s employer Beaverbrooks.

She donated her hair to Little Princess Trust, who make wigs for children with hair loss, and raised a massive £3,000 for NWAA!

Erin’s mum Clair, said: “The relief of hearing the air ambulance, and the way they reassured us that everything would be okay, is something I’ll never forget. Without them, I’m not sure Erin would have made the recovery she did. They saved her life. We’re really looking forward to visiting the base to thank the crew in person, and I hope Mark knows he’s getting a big kiss from me!”

Mark Etherington, Helicopter Emergency Medical Services (HEMS) paramedic, said: “Working alongside our colleagues at North West Ambulance Service, we were able to provide Erin with life-saving treatment at the scene. Every second in a situation like Erin’s counts, so following the quick actions of her mum in administering CPR, receiving this treatment gave Erin a fighting chance.

“We think Erin is a star and we are really grateful for raising such a huge amount of money to help us provide vital treatment to others.” 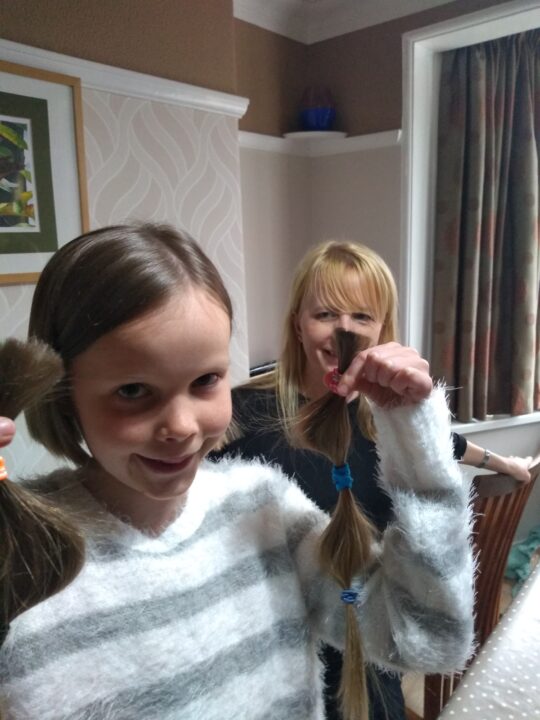